Although there is still some on-site photography to take place down at Birmingham Oratory, this week CHICC celebrate the completion of principal photography of the Newman Archive. In total, the project has taken three years, comprising of 11 batches (238 boxes in total), and the grand total of images generated here at John Rylands Library is 233,886.

Batch 10 included some fascinating photo collections, and it seems the Cardinal was partial to a portrait – and certainly not camera shy! One album consisted entirely of portraits. I have selected some of my favourites, and would go as far as to speculate if he were alive today, he would more than likely be a big fan of the selfie! 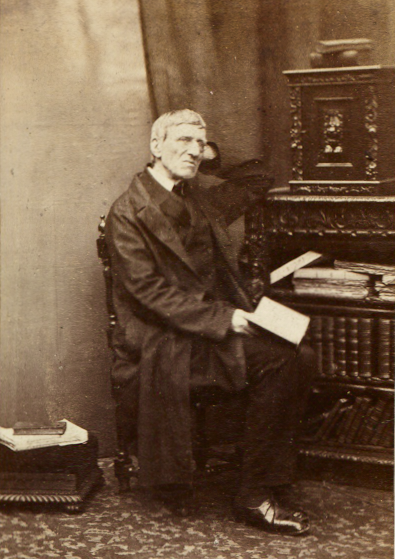 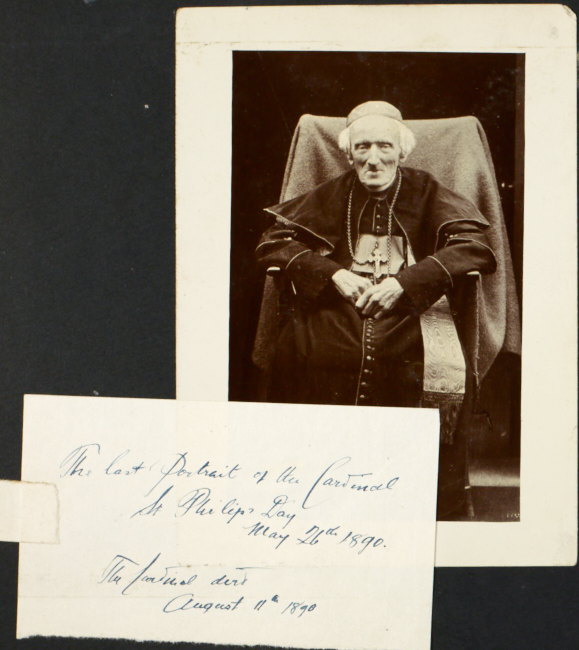 ‘The Last Portrait of the Cardinal

Although CHICC still have some digitisation and physical object photography to complete down at Birmingham Oratory, this will personally be my last blog post on the Newman Project, as my role comes to an end today and I’ll also be leaving John Rylands Library. It’s truly been a fascinating project to be a part of and it’s been a privilege to work with CHICC.

I’ll leave you with a beautiful poem by P.J. O’Kennedy titled John Henry Newman, which was published upon his death alongside his obituary:

One of our more curious finds from Batch 10, a public apology for peculiar events in which a young family were required to “strip naked both herself and Infant Child” and return clothing gifted to her by the church.

Batch 10 of the digitisation of the archive is going incredibly well, since the delivery in December, we’ve managed to shoot over 16,000 images.

On first glance I thought it would be standard images we have came across before, photographs of the oratory building, and of course the ever photo ready Cardinal Newman himself.

Of course, he is on the very first page however.

The album does contain very well composed images of the Oratory and related buildings, but it actually gives a fascinating insight into the life of those who studied and lived around the Oratory. Many well composed group shots of the boys and young gents that attended the school, cricket teams, sporting events and even theatrical productions are included in the album. 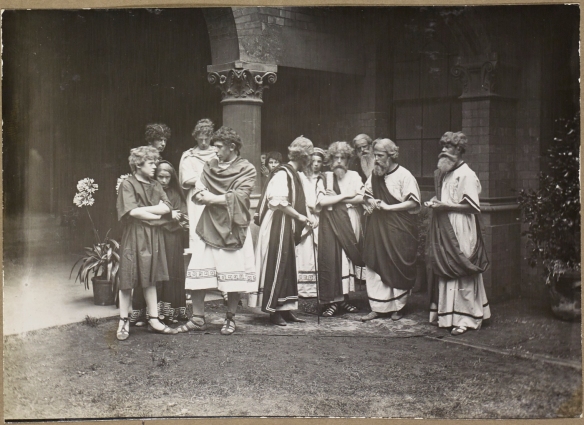 Quite impressive costumes and beards in a play

A group of young monkeys pose 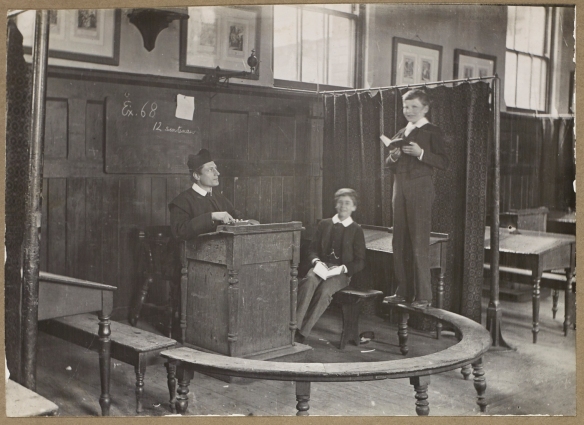 The project itself is starting to near its completion. There are only 8 boxes left to photograph of this batch, which is scheduled to be the final load, to be completed by the end of May. We also hope to visit the oratory and photograph some of the treasures held within its fantastic library.

Merry Christmas from everyone at CHICC/The John Rylands Library.

“My best Christmas Greetings to you family circle 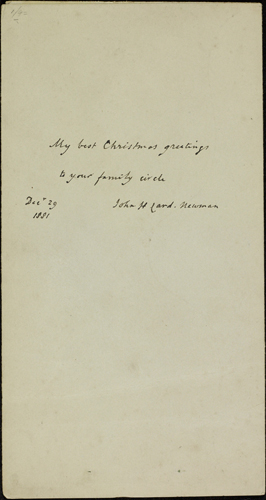 Last week CHICC handed over Batch 9 and received Batch 10. We anticipate batch 10 to be the final batch of boxes we will receive for digitisation, although some more may surface yet, and we will potentially be visiting Birmingham Oratory in Spring 2016 to photograph some physical objects.

Seasons greetings to you all!

While digitising the Cardinal Newman Archive we don’t have much time to stop and read what we put in front of us, the project would take much longer if we did.

Here I had quickly glanced at the style of writing, seen “Orphanage” as the address and assumed that it was penned by a child. But this time I paused and looked a little further… It’s not written by a chid at all but by an injured Ambrose St. John. We’ve done our best to transcribe letters from this episode below, however if you have any better ideas please let us know.

I have strained my wrist and shall stay here a day or 2. Dr says all well in a few days
Yours aff. 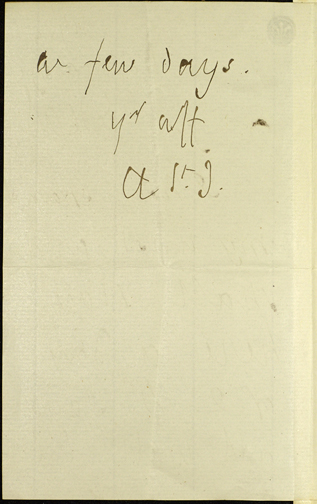 My hand is so much better that I must write a line to tell you not to be anxious about it. I can almost use it today. I shall D.V. go to Putney after Post time & then go on Thursday straight to Brighton & then on the Monday after on my trip if all is well. I am perfectly well (DF?) in health & spirits & have had a great time with the “old boy” abusing Deal pavements. All the same the place is much improved, a new pier and a long new Parade.

The Kearsage has been lying here. I have just seen her off. Please now dear Fr.don’t be anxious I am totally free from pain. Direct next letter 16 Wellington Villas, Wellington Road, Brighton.” 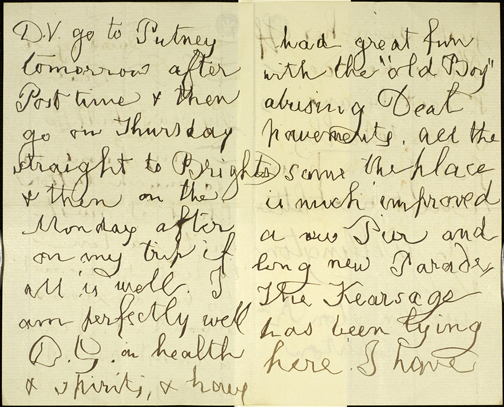 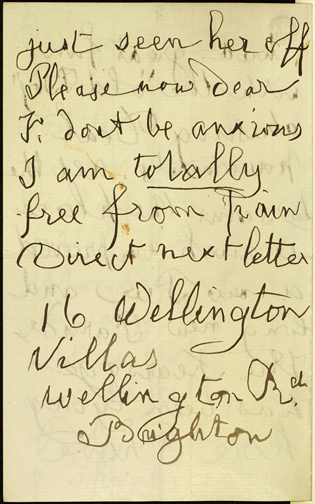 Thanks for your letter now I shall return to my left, only I wanted to see how much better my writing. I shall avoid London as the Morneys have not got their deed ready. I shall not wait if you wish I could I suppose get the power of Attorney from Brighton. I wish you please to leave it free to me to determine my course at Brighton one straight journey this and done with will be best. I shall I think any how go to Duppe on Monday nor will I go to Lucerne against your wish. My hand is recovering wonderfully fast it only wants strengthening now. I had indeed a very narrow escape of a broken arm. The arm was only bruised and is well now. This May has been very quiet & nice. Say an Ave for me at St. Philips, also remember my ??? anniversary, I cant say Mass yet. 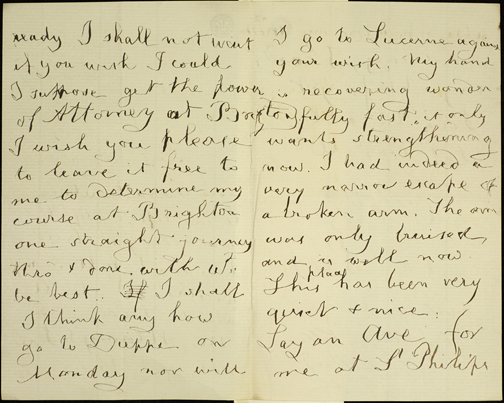 We have digitised a number of portraits of Cardinal Newman but this one is a little different from Batch 9.

A chromolithograph, published in Vanity Fair 20 January 1877. Men of the Day. No. 145. “Tracts for the times.” Caricature by Sir Leslie Ward. 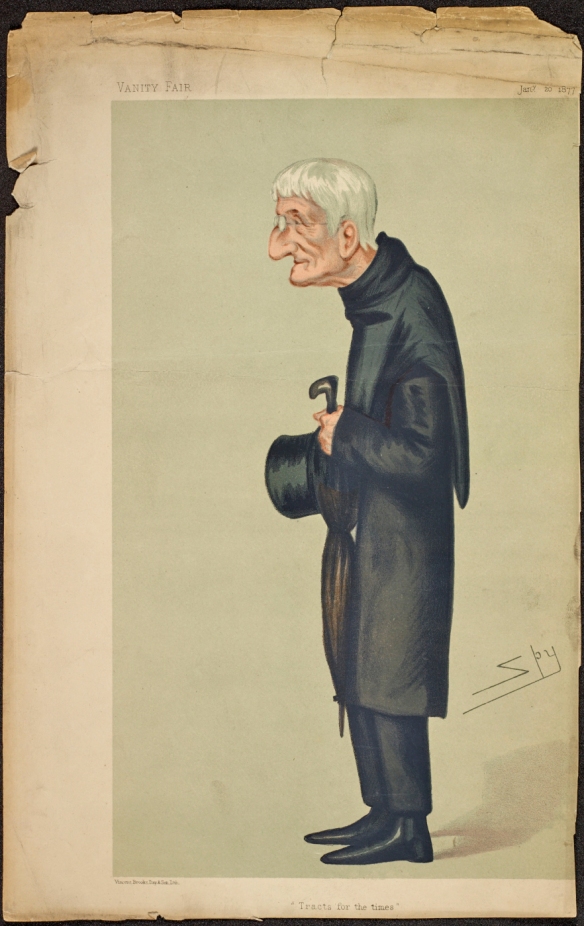 I found this reference to Ward’s caricature in the publication Forty years of “Spy”.

“Cardinal Newman quite unconsciously placed me in rather an awkward dilemma. At the time when I was anxious to stalk him I heard he was in Birmingham; so I went to Euston Station, and had actually bought my railway ticket when suddenly I caught sight of his Eminence upon the platform. Here was an opportunity not to be missed! I saw him go into the buffet and followed him. He sat down at a small table and ordered soup. I took a seat opposite and ordered food also, studying him closely while he partook of it. But I was not altogether satisfied, and I felt anxious to see him again. So I travelled down to Birmingham, and on the following day I called at the Oratory and asked one of the priests there at what time the Cardinal was likely to go out. Evidently, in spite of my protests, the priest concluded that I wanted an audience with Cardinal Newman, for saying that he would apprize him of my visit, he disappeared. My object had been to perfect my former study by a further glimpse; and a personal interview was really the last thing I desired. There was accordingly nothing left for me but to bolt!

And then this version in an 1889 article ‘How Caricaturists Catch Their Subjects’, Tit-Bits.

“The story as to how I caught Cardinal Newman might interest you. It was necessary for me to go down to the Oratory at Birmingham to see the Cardinal, and I arranged with an old schoolfellow who lived just outside the city of screws, to spend a week with him, and call on my respected subject whilst there. Strange to say, when I got to Euston, the very first man I saw on the platform was the Cardinal himself, who was going down by train. I followed him about, and, though he may never know it, I say at the same table as he did in the refreshment room to which he had gone before starting.

“I went on to my friend’s at Birmingham, and still wanting one or two details, I called at the Oratory one day and inquired what time the reverend father would be going out, as I should like to catch a sight of one I so greatly admired. They told me he had a cold that day, but he might possibly be going out on the morrow. The next day, which was my last, found me waiting, but as nobody came out, I determined to call again. I did.

“’I think the Cardinal will see you,’ said the attendant. ‘I will go up and ask him.’ And do you know, sir, I felt so terribly nervous at the thought of deceiving him, and so fearful that my excuses for calling would not warrant my disturbing the one I wanted to see, that I do not know to this day what message was brought back by the attendant. As soon as he left me I opened the door and quietly bolted!””

One surprise from that batch found in a folded piece of paper was this lock of hair. Unfortunately there is no date or explanation.

Jamie signing over the rehoused Batch 8 for Batch 9.

This week we digitised pages from George Lewis’ illustrated book of Kilpeck Church in Herefordshire. The Lithographs are by Day & Haghe.

Cardinal Newman is mentioned in the list of Subscribers on the 7th page.

The cropped images below are a small selection of the pages loose in a folder of Batch 8. 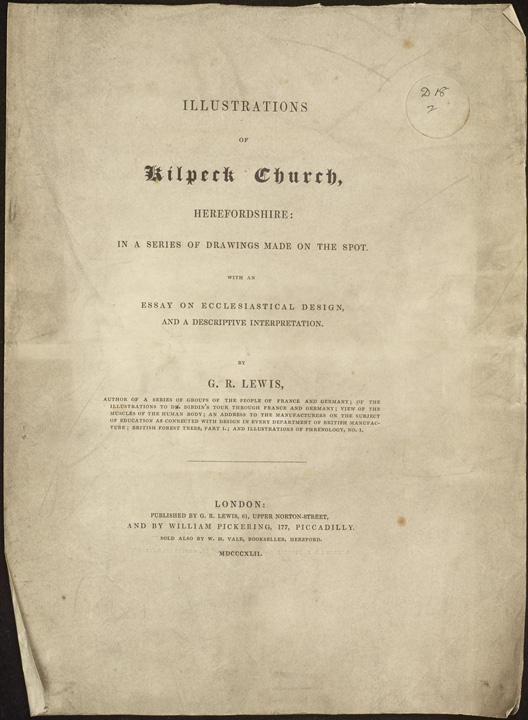 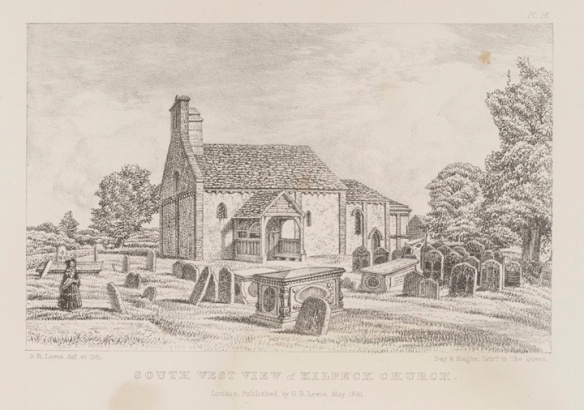 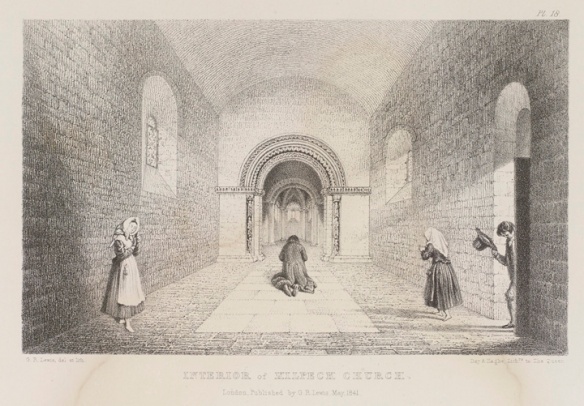 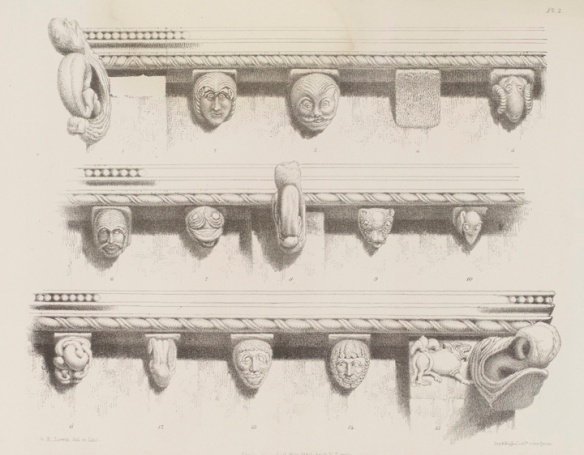 Columns of the Chancel Arch

The Symbols of the Evangelists in the Holy of Holies 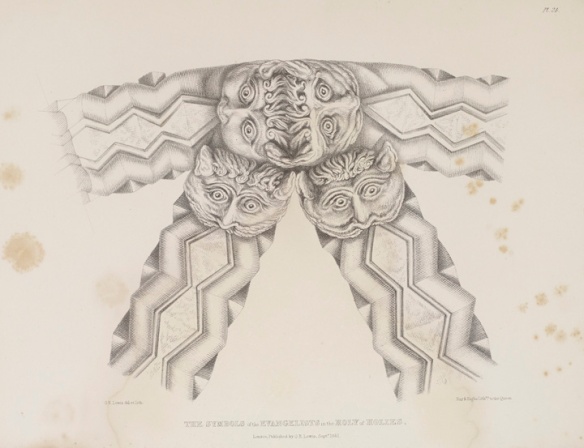 View of Pilbeck from Dippers Moor

Another interesting web page with further photographs about Kilpeck Church can be found here.

Historical weather forecast records for Oxfordshire for June 1866, from the Met Office website:

Thankfully the weather in Oxfordshire today is glorious, for which we’re sure the sheep are truly thankful!